King Pélagique A Group, a story, a family.
Online Catalog 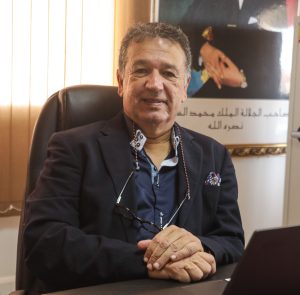 Our story to tell to young and old

It is difficult for me to talk about King Pelagique without saying a word about its genesis.

Having started my career as a cephalopod ship-owner in Agadir, the octopus crisis and the drastic decrease in catches at the beginning of the 2000s, forced me to find other solutions: the octopus resources had depleted, only the sardine stock constituted an interesting resource, because it was solely exploited industrially by a fleet of Russian freezer trawlers, which transshipped their catches for export (which marginally benefited the national economy).

In order to interest the Moroccan administration in considering access to this resource by a national fleet, it was necessary to suggest the conversion of cephalopod vessels, which would certainly alleviate the pressure on the cephalopod stock (thus offering the first advantage of valorization), but above all to present the second advantage, certainly the most convincing one,landing and valorization of the catches on Moroccan land. And what at first seemed to be a simple boast turned into a real gamble.

Once the agreements in principle were obtained, the next step was to find the appropriate vessel capable of fishing a fragile resource such as sardines, but also of landing them in very good quality in order to obtain a high valuation. However, it was difficult to follow this model in other regions of the world, as few fishing areas have the same species and the same constraints, so it was necessary to innovate and adapt the conditions of the vessel to the conditions of the species. This is how the RSW (refrigerated sea water) vessels made their appearance in the Moroccan fleet.

The fishing obstacles having been removed, we had to develop the processing capacities to valorize quantities that could reach 250 tons of landings in order to avoid ending up in a process that is not very valorizing, namely flour.

This conception of a process by stages and integration of the added value has favored the birth of King Pelagique which is today the first integrated group of pelagic fishing in Morocco, starting in fishing to elaborated products through freezing, filleting, canning, surimi base, and the production of fishmeal and oil.

If the history of the group is dense and exciting, it has not been without adventures. And if we have been able to overcome a certain number of constraints, it is above all thanks to a team of women and men united by a sense of Challenge and a lot of things well done.

Thanks to this philosophy, King Pelagique has contributed to create the human capital of the city of Dakhla and to lay the foundations of its regional development.

By adopting this integration strategy, the King pelagique group and its skilled and passionate teams have been able to reach levels of valorization of the raw material which are certainly among the highest of the continent and this thanks to a triptych of values which is declined as follows:

Its fleet of five RSW vessels employing 120 sailors has created more than 2,500 permanent jobs on land. This allows it to proudly announce that for each day of work created, only 80 kg of pelagic fish were caught: This represents the lowest rate of kg of fish caught per day of work created in the sector.

And consequently the highest rate of valorization of the raw material. If we consider that the added value is the main indicator of wealth creation in a country, we can better understand the importance of this segment in the regional economy.

If today, for all the teams of King Pelagique, to be part of the leaders is not a simple positioning or even an easy place… it is above all a vision accompanied by a culture of the rigorous which is declined by a commitment of quality for our partners and our customers.

The KING PELAGIQUE GROUP leader in the marine fishing sector, with more than 30 years of experience, covering the entire value chain, from the armament of fishing boats (RSW) upstream to downstream, by processing all the fish into our different components:

Our group is committed to respecting the obligations in terms of product quality, supply, safety and preservation of natural resources. Thanks to the expertise, the knowledge and the mastery of the profession, we are grouped into 5 locations:

The cooling system installed in our five RSW boats allows the temperature of freshly caught fish to drop from 18 to 0 degrees in minimum time, a very essential process to provide you with superior quality products.

Refrigerated Sea Water RSW systems are used onboard fishing vessels to preserve large catches.
Storing the catch in an RSW system is an effective and cost-saving method of preserving the catch until offloading ashore or further processing onboard, in a short time, As soon as cached, the fish is stored in refrigerated seawater at a temperature of 2 ° C maximum, assuring its freshness and quality during transport.

Our team is the secret to our success. Each of our employees is amazing in their own right, but together they are what makes KING PELAGIC such a great and experimented Group.

We are very proud of the team we have built; we are committed to developing our people to support our team and believe in building capability, technical, professional and leadership, throughout our organization.

We have consistently embraced innovation to provide a superior level of excellence for our customers For more than 20 years of experience, our equipment has played a key role in the development of our industry.

THE FRUIT OF TARGETED AND CONTROLLED GROWTH.

In more than 30 years of experience, systematically, KING PELAGIQUE GROUP has become increasingly important for developing & valorizing fish in Morocco. Engaged in a controlled process of internal growth, the group has extended its activities from, the armament of fishing boats (RSW) upstream to downstream, by processing all the fish into different locations:

BENIS PELAGIQUE was created to ensure the supply of fish

The year was marked in the Group by the start of freezing activities. KING TRAITEMENT specializes in the selection of fish. While, GOLD SEA FISH develop catch preparation and freezing activities, with a freezing capacity of 200 MT per a cycle of 12 hours and storage of more than 2000 tons of frozen products.

Launch of the cannery:

The fish cannery operated by the ERG CONSERVE subsidiary is commissioning its production lines.

The production capacities of the ERG CONSERVE cannery are increased. New production lines complete the industrial tool and expand the range our products.

The new PROTEIN & OIL Subsidiary was launched, to get the most out of fish, capitalizing on the big experience of our Group’s industrial & commercial knowledge and respecting the highest environmental standards. The unit produce animal feed meal and extract fish oil intended for the Cosmetics and Para pharmaceutical industries.

 By owning 5 RSW vessels, KING PELAGIQUE GROUP Maintain you large catches.
 A quota of 80.000 Tone, to preserving you an annual stability of the raw material.
 90% of Moroccan Sardine comes from DAKHLA PORT (3km from our factory FAO 34).
 In light of the proximity of our manufactory, we Receive fish in less than 30 min, at a temperature of 5°.
 Keeping and transporting fresh fish, mastering the Histamine level into the bargain.
 Investments and innovative technologies for sustainability and the reservation of fish. (1.2% bycatch)
 High performing experimental team members.

We are proud of ourselves, of what we do and how we do it.

The KING PELAGIQUE GROUP, leader in the marine fishing sector, with more than 30 years of experience...
More About Us